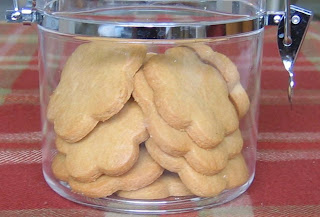 I don't have much of a sweet tooth and generally like to snack on spicy and savoury things. Cookies are such a classic American snack..abundantly available everywhere with gazillion choices and generally loved by everyone. I have never been a big cookie fan and in the 3 years that I have been here, have bought cookies maybe 2-3 times. I find the commercial verieties too sweet for my taste. I associate cookies or biscuits (as we call them in India) with tea time and the habit of dipping them in tea before eating them. The cookies available here don't really lend themselves well to tea-dipping. Even in India I would prefer the not-so-sweet Marie biscuits over any other for tea dipping purposes. This week I thought why not try baking cookies at home..that way I can control how much sugar goes in and the quality of ingredients I use. My husband loves shortbread cookies so I thought I'd try them first. Of course I found a millions recipes online for shortbread and I finally settled on this one from La Tartine Gourmande. I chose it because the amounts of sugar and butter were much less compared to other recipes and I knew that I wouldn't end up making a hundred cookies in one batch. I made two batches just in cae I wanted to make some changes and it was my very first attempt so, I wanted a backup in case I messed things up. I ended up adding more sugar, about 3-4 tsps more to the second batch and I had also forgotten the salt in the first one. The entire process was very simple and there is a certain satisfaction one gets when you take that first bite of homemade cookies. They were crumbly and buttery and made my apartment smell sooo good! This is such a basic recipe that you can really play around with it a lot and I know I will add some vanilla essence in my next batch. I didn't even try these with tea..we finished them up in a couple of days. I don't think I can ever bring myself to buy cookies from a store again. I am also going to try a couple more shortbread recipes that I thought were interesting. I also made a batch of chocolate cookies which were everything I thought they would be and more! That's coming up in the next post.
Posted by Soulkadi at 7:46 AM No comments:

I just graduated a couple of weeks back. Yay!! It feels so good to be done with all my projects and I wake up everyday feeling good that I don't have to deal with any assignments anymore! The last two years have been pretty hectic and I wasn't been able to cook and experiment as much as I wanted to.I have a lot of time on my hands these days and along with hunting for jobs I've been trying out different things in my kitchen.
We (my husband and I) just moved to a new place a couple of weeks back and I'm really loving my new kitchen. Apartments here in Houston usually have regular laminate countertops. But, this kitchen has a granite countertop and I really love it. All windows in the apartment face this wooded preserve so we have absolute privacy and a gorgeous view. Anyway, enough about our apartment...I woke up a little later than usual today and was not in the mood to cook. My husband works very close and comes home for lunch everyday. So I thought I'd just make some frozen aloo parathas. Then at about 11 I suddenly had this urge to cook and realized that the only veggies I had were some baby potatoes..so I got to work..made some dough for chapatis and started on the potatoes...I just kind of improvised and trust me it is super fast! 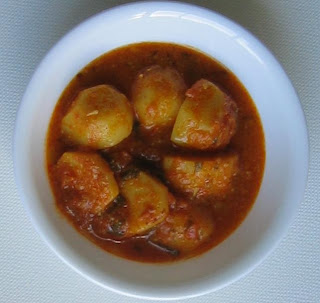 Heat the oil in a pan and then add the GGG paste. On medium heat, saute this till it changes color and is light brown. Then add the chopped tomatoes and saute this till most of the water evaporates. Then add both the masalas and turn the heat to medium-low and continue to saute until the mixture starts leaving oil on the sides. The whole thing should smell very fragrant. Then add the potatoes, salt and about a cup of water and cover it..let this cook on low heat. Stir it every five minutes or so. Cook till the potatoes are done. Turn the heat off, sprinkle the cilantro and serve hot with chapatis or parathas.

This was a totally easy and tasty curry and I will be making this more often. I might also add some peas next time and turn it into aloo-mutter!
Posted by Soulkadi at 12:59 PM 1 comment:

I don't think I can call myself a good cook. My mom is considered a great cook and everyone loves anything she makes. I wish I'd learned more from her before I moved to the US. Now she guides me over the phone and even though it helps, I'm never satisfied with how the dish turns out. This is my way of documenting some of my mom's recipes and some of my attempts at trying out new dishes.

I love the Williams-Sonoma store...the beautiful pots and pans, the bakeware, the glassware and so many fun kitchen things that any cook would love. They also have a series of books and I had picked one up a few months back. It's called Savouring India by Julie Sahni. The book has beautiful pictures for almost all the recipes which is always such a big plus. The best part however is that all the recipes are so simple and appealing...it very rarely happens that I feel like trying every recipe in a book. It's a perfect book for a new bride or someone just starting to cook Indian food. The recipes are very authentic and not "Americanized" as you'd expect.

This is the second recipe that I've tried from this book with a few changes to the original (the first one was a simple dal with panch phoron). 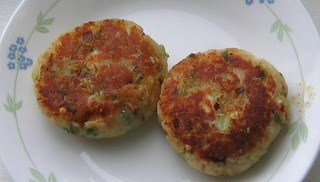 The cutlets were very tasty and we really enjoyed them a lot. I think they would also go well as ragda pattice cutlets.
Posted by Soulkadi at 9:02 PM 2 comments:

Blogs that inspire me..